Glover wanted to use her The Island in My Backyard expedition to show people how readily accessible — and relatively cheap — such a journey can be for those who live here. No flights or ferries to go on this trip. She didn’t even have to get in a car.

“I just went out my front door and started walking.” … 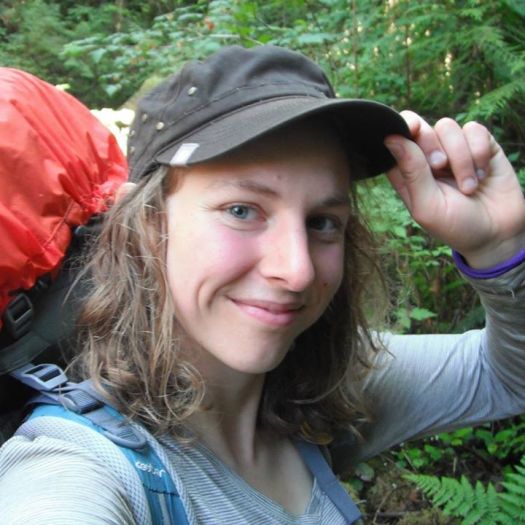 … The Vancouver Island Trail — also known as the Spine Trail — is only 80 per cent complete, and even then “trail” can mean anything from a dead flat, three-metre-wide, groomed path to a never-trodden forest route only discernible by occasional markings on the trees.

Then there were the gaps where forging ahead meant bushwhacking down 45-degree slopes.

Glover planned meticulously, preparing dried food and figuring out routes that would allow her to camp close to water sources, but even then there’s nothing quite like the reality of forest so dense that it’s all but impossible to cover the 20 metres from tent to lake. …

Intrepid soul shows how to step up to nature 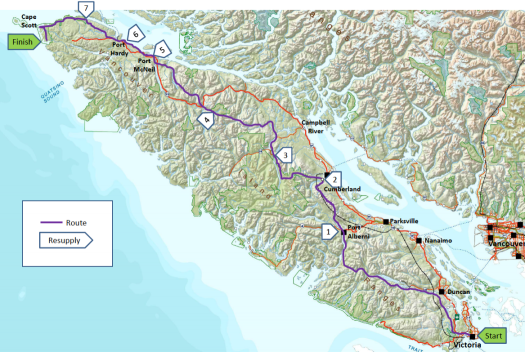 She had some funding from the Alpine Club of Canada for this adventure.

The Vancouver Island Trail is a multi-use (foot, cycle, equestrian) non-motorized trail, that links communities and ecosystems along a 765 km long, north-south transect of Vancouver Island. It uses both new and existing trails and inactive and active logging roads. At the start of 2018, it is still a work in progress with approximately 86% of it now complete.

For more details on the history of the trail, the organization’s Mission and Vision statements, recent newsletters and trail progress, and to become involved, please visit our website: vispine.ca

There’s an online hiking guidebook in the works.