It is the jumping off point for the Lost City trek. 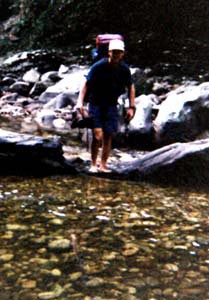 Six-day return treks to the ruins of La Ciudad Perdida are only allowed through a government agency. Guides arrange transport, food and accommodation — essential because the area is a significant marijuana and coca-growing region.

I, like the other backpackers in Santa Marta, was nervous about making the trip.

A selling point, however, was that hikers of all nationalities were allowed to trek except Americans — they make too attractive kidnap victims.

Our guide was most famous and experienced having made the trip over 500 times since the Lost City had been rediscovered in 1976.

I carried my tent on the trek, much to the consternation of my old guide. He insisted we sleep in hammocks in the South American tradition.