UPDATE: Rob sends us GPS coordinates for hikes in this Park. For 10 different routes!

The best hiking region in Portugal is Peneda-Gerês National Park. All agree.

But what’s the best hike there?

That’s a difficult question. Most agree that the southern portion of the small U-shaped Park is the best section. 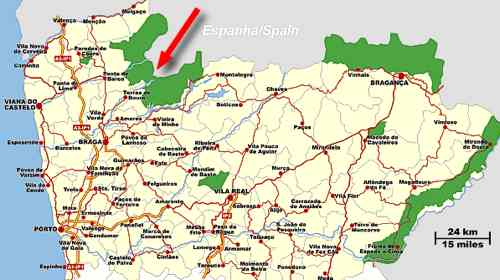 That’s where I hiked, on a number of different short trails promoted by the Park, yet badly signed. I’m not particularly inclined to recommend them.

I based myself out of the small town of Campo de Gerês near the biggest and most popular hostel, Vilarinho das Furnas. And I’d recommend you stay there too as it’s easily accessible by bus.

If you have your own vehicle, the nearby campground looked great. And ideally located for the short government signed trails.

Driving in rural Portugal is challenging, though. Click through to this trip report:

Every so often you come across gorgeous hickeldy pickeldy farming villages with tiny streets next to no cars but lots and lots of mini herds of creamy brown cows all wearing big brass bells! At night the cows stayed in barns but during the day they didn’t have fields but were driven from place to place so over the next two days we were surrounded by bird song and jingling cows! At dusk on the first day though we were in for a surprise turning a corner and coming face to face with the first herd. As the lane was very narrow we retreated to the car where the dogs sniffed and snorted loudly in the back and the cows smeared their noses on the windows….

But the best hike, in my opinion, would be to carry a tent and head on up on to the ridges to wild camp. This is not legal, as I understand it. But if you buy a map in Lisbon, start walking towards those areas with the least road access. Camping’s not likely to be a problem if you set up in the wilderness after dusk. The park is mostly used for seasonal grazing.

(Don’t try that during Autumn, though. The definition of “National Park” is different in Portugal. There it’s an area to fatten up birds and game until hunting season.)

This is not a wilderness park. There are use trails between ancient villages. And livestock trails everywhere.

Many of the villages have nobody left younger than age-60. The young people move away. Tourism can revitalize, though. You can organize farm stays in 700yr old buildings. How rustic is that?

Reservoirs and waterfalls are the highlights for many hikers.

Leave a comment if you know of an established best hike in the Park.

I found that very few locals speak any English. Best learn the basics in Portuguese or you’ll be troubled finding out when the next bus comes past.

It’s no hardship getting to Peneda-Gerês. Convenient and inexpensive trains run from Lisbon to Porto. And from Porto to Braga where you catch the bus to the Park. You’ll want to tour both cities, sampling as much Port along the way as possible.

Winos will not be able to resist a wine tour in the Douro Valley.