I slept poorly, quite common at high altitude.

At first light, outside my window, I saw white stuff piled up on the Yaks. An early snowfall, not all that unusual in November.

Instantly I thought of the November 1995 freak snow storm where dozens (46 some say) of hikers, porters and guides were killed throughout the Himalaya, most by avalanche. 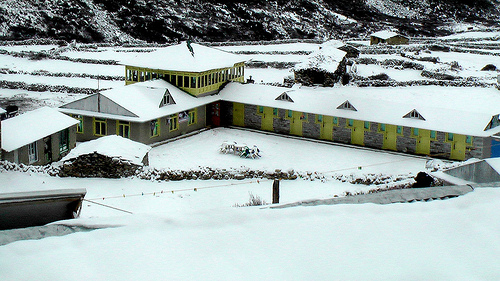 At breakfast that morning, after consulting with guides and hikers who had been there, I decided it might be too dangerous to cross the Kongma La 5535m (18,159ft) after a new snowfall. Instead I would head directly to Mt. Everest base camp skipping the recommended acclimatization day. I felt good aside from the lack of sleep.

As a Canadian, I had no fear of this light snowfall. In fact, it turned out to be the most beautiful day of the trek.

The highlight of a wonderfully scenic day was the shrine of Babu Chiri Sherpa at what some call Dughla Pass.

… With ten Everest Summits (including 4 North Side summits), many considered Babu Chiri Sherpa the strongest climber on Everest. …

Babu Chiri Sherpa passed away after unexpectedly falling into a crevasse at Camp II at 1600 hrs on 29 April 2001. …

I left a Summit Stone there in tribute to him and all the Sherpas who have died over the years.

Scott Fisher, ever the showman, has an impressive shrine just beside Babu Chiri.

I was very happy to finally catch up with Ping and Shirley from New York.

We had flown in and walked together the first day. Due to my altitude sickness I fell behind day 2. Ping and Shirley had only a 2 week holiday to try for Everest and Gokyo. (Short holidays is one of the reasons there are surprisingly few Americans trekking Nepal. You’ll meet more Canadians though Canada has one tenth the population.)

I was so inspired by this beautiful and spiritual place that I decided to pitch my tent right there in the snow amongst the hundreds of shrines to fallen climbers.

I wanted to see sunset from this vantage. Here’s last light as seen from my tent. 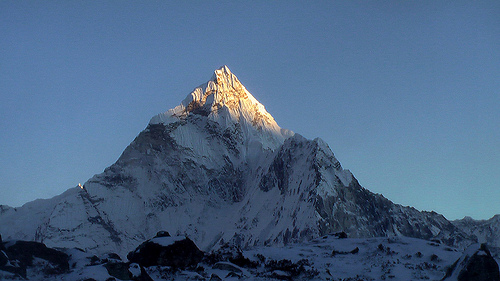 all photos from day 7