Namche Bazaar is the last village of (comparative) civilization before the high Himalaya. My batteries were literally and figuratively recharged after a rest day there.

Aside from other errands, I visited the library and bank. (You need enough Nepali rupees and American dollars in cash in case you might need emergency evacuation.)

I did, as well, intending to do the Three Passes of Everest trek, a relatively new itinerary. It’s basically a big lollypop loop hike as shown in red above.

Tengboche is not all that difficult a hiking day as the gain in altitude is reasonable. But the scenery quickly becomes more dramatic. Meet Ama Dablam, soon to become my favourite mountain in the region. 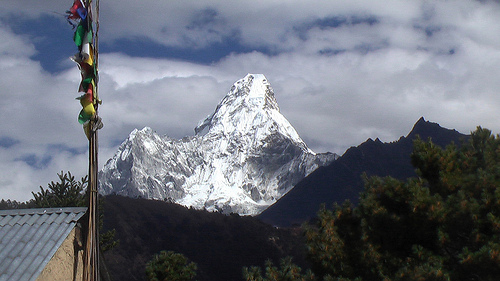 Many guest houses sell “hot showers” for about $3. That gets you 20 liters of solar heated luke warm water. I washed, instead, as do the Nepalis, in a freezing mountain spring or from a standing tap.

The mountain women all have lovely, thick long hair. But washing it and staving off lice is challenging.

Tengboche is a popular stop because of the famed Buddhist monastery, the largest in the Khumbu region. It was rebuilt after a fire in 1989. 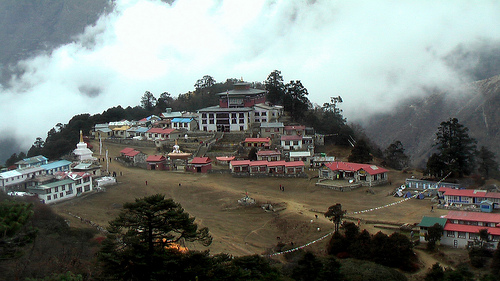 I love these colourful monasteries having visited dozens in Tibet 11yrs ago. 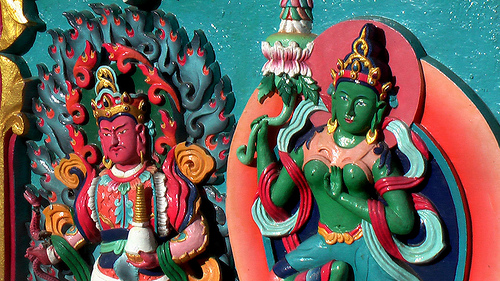 But the highlight for me that day was meeting a Sherpa who had 5 times been to the summit of Everest working for Russell Brice of Chamonix Experience. He shared great stories with tourists and monks, there as a guest for a big Puja. High altitude Sherpas are wealthy celebrities in the Khumbu.

Rarely can I pass by any bakery. The one in Tengboche is particularly good.

I was tempted to set up the tent. It’s a charming place.

… But with a couple of hours of daylight remaining, I decided to gain another couple of hundred metres. Altitude and attitude are everything when trekking up to Everest.

If you feel ill, stop. If you feel good, climb higher. As an independent hiker, I had this option. I was not bound by the itinerary of any group. In fact, most hikers stricken with altitude sickness are in groups, denying illness, trying to keep up.

I trekked on alone, the trail deserted after 4PM.

all photos from day 5